Skip to main content
Labels
Posted by Conjuring Justice May 01, 2020

CHAPTER 3 OF THE DEVIL WAS APPOINTED IN GEORGIA

Robert “Cory” Sasser’s law enforcement career was marred by repetitive  behavioral and procedural transgressions. Simply put, he was an albatross around the Glynn County Police Department’s neck.  His extensive Internal Affairs cases tell a story of a man who has serious problems with authority, and a brazen & corrosive contempt for the rules. His progressively increasing disregard for anyone or anything are shamefully conspicuous to everyone around this man. Intelligent professionals, who were exposed to him over a long time frame, should have seen Sasser for what he was, a train wreck waiting to happen.
Here is a brief summary of Sasser’s documented discipline issues & indiscretions (2001-2011):

Note, there is a huge gap from 2005-2011; there is no hint of the Caroline Smalls shooting in 2010 nor is there a mention of another dubitable shooting of a drug dealer in 2005. In this shooting again he shot the suspect through the windshield.  He was cleared for both shootings however, the departmental policies and procedures that were no doubt violated, are absent in this laundry list of Sasser’s misbehavior. Another exclusion is an incident in January, 2011.  Sasser immodestly flaunted the fact he was “untouchable” to his colleagues.

Understanding Sasser’s history of perpetual and escalating misdeeds, any person would have had the duty to weigh the second shooting in 2010 (a shooting that is nothing less than first degree murder) heavily. D.A. Jackie Johnson makes the purposeful, informed choice to undermine the prosecution of Sasser and in that act, she diverges from the position of D.A., electing, instead, to be Sasser’s voluntary co-conspirator in any and all crimes this man, later, commits.  And as it could be expected, Sasser and Jackie’s stories march into historical notoriety.
In May of 2018, after Sasser and his wife, Katie, separate. To no one’s surprise, he began terrorizing her. This is body cam footage from an incidence on the 13th of May, 2018:

Sasser is not arrested during this incidence. Anyone else would have been, without question, on the spot. On Monday,  the 15th, when Chief Powell finds out about this event, he loses his cool. Based on Sasser’s “untouchable” standing with the D.A., Powell requested the elected Solicitor General, who, in Georgia, reviews & prosecutes criminal cases, and the Chief Judge Magistrate, to review the evidence for potential criminal charges. This is not protocol but Chief Powell believed his office may be seen as bias and the D.A. who works hand in hand with judges may subvert the case and criminal charges. The Solicitor General, believed to be a lesser biased politician, and Chief Judge Magistrate reviewed the case and the body cam footage. Both agreed that despite the responding officers’ belief that there was no probable cause for arrest, the Solicitor General and Chief Magistrate found probable cause existed for Sasser’s arrest that night. Their decision was that only misdemeanor charges of simple battery and criminal trespass provided that probable cause. An IA was initiated on Sasser  and was put on admin leave without pay until the IA was concluded. The officers on the scene of this domestic violence event were later disciplined by Chief Powell for their failure not to take the appropriate action the night of the incident. Their relationship with Sasser recklessly tainted their judgment.
On the following Thursday, May 17th, Sasser turned himself in. Enigmatically, before anyone knew he had turned himself in, he was released on bond. Sheriff Neal Jump facilitated his bond and ensured Sasser received an expedited first appearance, outside of normal court scheduling. Jump also gained an extraordinarily fastidious release for Sasser on domestic violence charges. Sasser, literally, bonded out within the hour after his arrest. Here are the documents from this arrest, including the bond :

A victim advocate contacted Katie Sasser to tell her of her husband’s arrest and immediate release. The victim advocate was concerned about Cory’s welfare, believing him to be suicidal. It isn’t clear that this advocate feared for Katie Sasser’s well being. By all accounts, it is suggested Cory Sasser was the focus of concern, rather than his wife. This is uncustomary all the way around. Sasser’s history was indicative of someone who would re-offend in this situation. Domestic violence cases have such a high predictability of ending with murder or suicide. That is why risk assessment measures by officers on the scene and the legal system are educated on perils and statistical consequences involved in domestic violence cases; it is they that dictate the level of precautions to be taken.
Despite the cumulative training all the professionals involved may have had (you guessed it), this is not the end of the story.
Labels: DOMESTIC VIOLENCE jackie johnson John Powell KATIE SASSER robert "cory" sasser SHERIFF NEAL JUMP 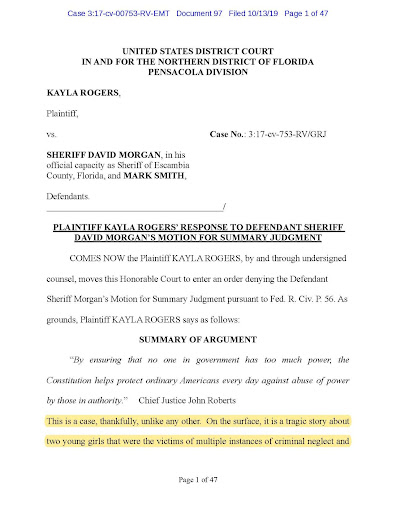