Mr. Marks,
I bring you yet another communication, ON BEHALF OF CITIZENS OF PENSACOLA, to ask WHAT IS WRONG WITH WEAR 3?
Your mission statement:
As expected, there is still no mention of the State Attorney's Investigation of the Escambia County Sheriff David Morgan and his misuse of funds. This "insignificant" investigation questions how the HONORABLE Sheriff Morgan wrongly allocated funds to non-profits for quid pro quo donations from their members to his campaign fund. This should have been overseen by 5 county commissioners and the budget director of the county. We are talking about $1M misappropriation, which I believe is a felony in any other profession. During the last several weeks, there are 6 elected officials and one higher ranking county official that are being investigated  The investigation is still on-going (which gives the accusation much more credence) even as the good Sheriff doles out more money and brags about it on Facebook pompously throwing it in everyone's face.
This story which potentially affects the entirety of your broadcasting area, but WEAR is mum. 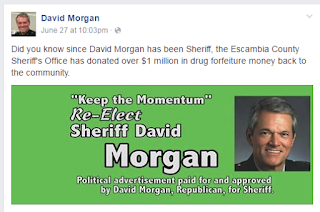 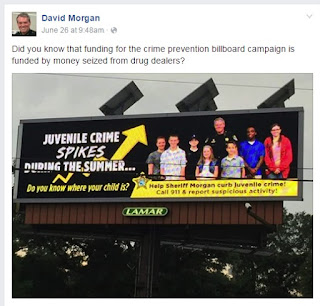 Yet a falsely reported violation of the Florida Sunshine Law (which would have been a misdemeanor punishable with a fine) of one county commissioner was covered by Channel 3 at the behest of another county commissioner.  Commissioner Doug Underhill ran to the State Attorney's Office and reported Commissioner Grover Robinson for talking about about county business outside the county commission meeting.
http://weartv.com/news/local/sunshine-law-violation-filed-against-grover-robinson
Then within approximately 24 hours this story ran:
http://weartv.com/news/local/no-violation-of-sunshine-law-committed-by-grover-robinson
Fact: Grover Robinson was investigated for less than a day of a misdemeanor & Channel 3 ran the story.
Fact: The Sheriff of Escambia County and all 5 County Commissioners along with other county personnel are the target of a lengthy investigation for felony misappropriation of county funds and conspiracy  & Channel 3 has yet to cover the story.
If the entire county government infrastructure facing possible impeachment, removal and/or indictment is not newsworthy, then there is no story that needs to be aired.
The trust of community rests on the accuracy of news reporting. Mr. Lowe's integrity is incontestably deficient if not, non-existent.  I reiterate,the validity of this broadcasting station as a news entity is continually enfeebled by political partisanship. In fact, the impulsive jump to run the story regarding Mr. Robinson could be seen as possibly malicious defamation. It was prematurely reported, particularly given the quick dismissal by the State Attorney's office. Had Mr. Lowe put the same "consideration" in airing Mr. Robinson's investigation as he has in not airing the story on the Sheriff, it would not have been news at all.
How do these two news items align with your mission statement?
- Does it hold politicians accountable, asking the tough questions your audience would ask?
-Does it alert, protect or empower the community?
A response would be greatly appreciated in this matter because I am holding you accountable on behalf of the Pensacola community.