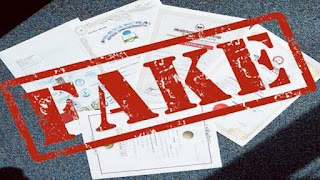 I previously posted about the National Student Clearinghouse reporting  that there was no record of David Morgan (Thelbert David Morgan) as being a graduate. In an effort to confirm or verify this information, I contacted Webster University directly. I spoke with Ms. Geraldine Lovejoy, yesterday April 11th, 201

6.  Ms. Lovejoy confirmed that not only was "Thelbert Morgan" not a graduate, he is not listed as ever being a student at any time.
In doing my own independent research after requesting this information in writing, I found that in 1980, there was no Webster University; it was Webster College and the only Master's level class, Webster College was a Master's in Teaching. In 1983, the college restructured its programs and expanded its curriculum. More programs were added and the name officially changed from Webster College to Webster University; however it was not until 1985 that the first MBA program was offered.

After  I confirmed this with more than one source, no one could have gotten an MBA at Webster University in 1980. After making that fact clear, I leave it to the people to decide what they think.
I am not a legal scholar. This level of misrepresentation is a career-ender in the private sector. Reputation and integrity are fixtures in employment agreements.  However, Mr. Morgan being an elected official, this is a horse of a different color. His job did not require that level of education but it is misrepresentation and fraud, which is a crime. Now we will see how corrupt the system is. Now that we all know he has lied, and lied and lied some more to the people of the community, let's see how the community responds to this. Like I said, an average citizen would be looking for a new job.