This post is merely to get you to see what is plainly in front of you. The science of body language has been researched and perfected to the degree that people get paid to give lawyers, criminologists and law enforcement a glimpse into the unspoken energy within a situation. By unspoken energy, I mean the things that are not seen but are more honest than words. Personal feelings can be censored but unconsciously, the body cannot hide all the "tells".

For instance, I look at this picture of Sir David, Gov. Scott & Mayor Hayward. Right away, I notice that Scott is leaning toward Hayward and away for Morgan. Morgan's biggest "tell" is his teeth clinching like we all saw in the town forum/debate where he lost his cool defending himself in the face of evidence of his incompetence. He is expressing it to some degree here, as he leans away from Scott. The other things is the hands in the pockets. You will notice the people on the right in the photo have their hands relaxed and in their pants' pockets. Morgan has his hands in his jacket pocket, up and in front of him. This is equivalent to crossed arms. It is a posture of protection or defense. 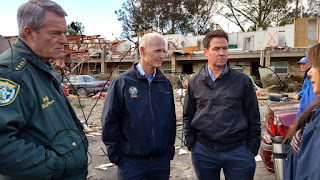 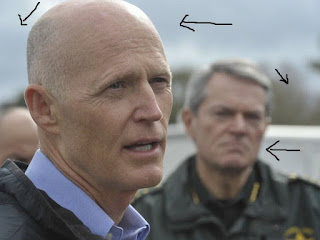 In this picture, the same tilting of heads away from each other and the grimacing Morgan sourly watching Scott speak 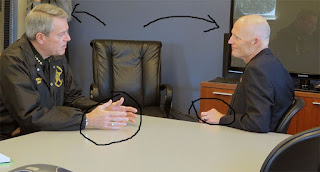 This meeting is clearly not going in Morgan's favor. How do I know? The evidence is in Morgan leaning forward, attempting to engage with hands in full motion and Scott reclining back away from the conversation with a "Bless his heart" kind of look that says, "I don't think so, Buckaroo". 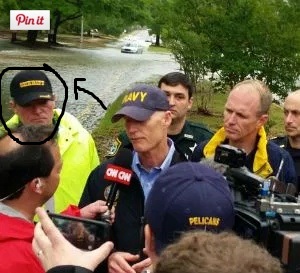 This is interesting because in trying to conform by wearing the ball cap, Morgan still fails because in a Navy town where he loves NAS programs enough to give them multiple double digit donations out of the LET Fund designated for law enforcement and crime prevention, he can't seem to manage to take that into consideration, looking conspicuously out of step with the rest of the crowd. He is also leaning away from Scott with his sourpuss face.