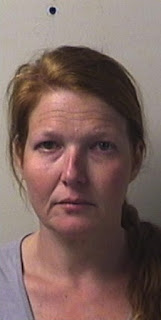 According to a source, Leah Manning is talking to the State Attorney's office, trying to make a deal to roll on her co-defendants, including her husband Douglas and "friends", Mark Smith and Walter Thomas. This is intriguing because this is a logical move. However, her story is damning for the Escambia County Sheriff's Office. There is chatter that one of the higher ups, that just abruptly left the ECSO, is possibly going to be named in deal.
But before anyone gets their hopes up, the State Attorney does not have the "greater good" in mind here. They want to make this whole situation "go away. Look for deals all around and the unnamed person who fled for his reputation, there is little hope that he will be prosecuted, because to make all this go away, the damage must be minimized.
Remember Haines did say there is no evidence against the deputies.  The surveillance footage from inside Mark Smith's house is damning, and it was taken into custody by Zach Ward, but Stephen Cappas was the primary investigator.

That in and of itself speaks volumes since Cappas only has the ability to cover shit up. From what I understand, that's all he's ever done.