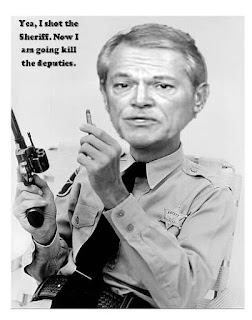 (Metaphorically kill the deputies. There is no insinuation of real killing.)
In an Independent News Cover Story from Sept. 4, 2008, Rick Outzen writes:

"The Morgan campaign strategy was simple. 'We made no secret that I was going to stand in front of people and tell the truth about the administration of this sheriff. I knew if we could get the information in front of enough people we would win,' says Morgan. 'We needed to communicate effectively that McNesby's record needs a second look.'"

When I read this, I have to admit, I laughed out loud. Morgan has never stood up in front of ANY administration and told the truth about anything.  As we already substantiated, he lies on pathological basis. He claims any number of things including his own belief in term limits & not to elect him, should he go "stupid", yet he then contradicts himself or flat out succumbs to arrogance and runs for a third term.

Sir David claims that McNesby's record needs a second look, while his record shows that he gives ill-equipped officers guns to put 16 bulletholes in an unarmed suspect and his vehicle for reaching for a cigarette; he also infamously made newspapers for being ill-informed and arrogantly making broad, generalizing statements like "it's witchcraft" or that Muslims are like Nazis. That is his record.

His fiduciary accountability is questionable in that he donated money that is not his in return for monies funneled into his campaign like Brownsville; this is researched and documented by CJ's Street Report.
So while McNesby had questionable ethics, Sir David has far exceeded him in that race. His minion David Craig even eluded to the fact that Morgan stole the election over McNesby.

In the same article mentioned above, this is another excerpt that is curious:

'"We went into the election day knowing that we were going to win by 10 points or more,' David Craig interjects. The actual margin of victory was 13.4 percentage points, or 3,211 votes. In the 2004 Republican primary, McNesby beat Morgan by 34 points."

How could anyone possibly know they were going to win going into election day? Or exactly what the spread would be?
McNesby may have done some unethical things but it appears Morgan's first official criminal act was manipulating election results.