A Brief Discussion with Fred Levin 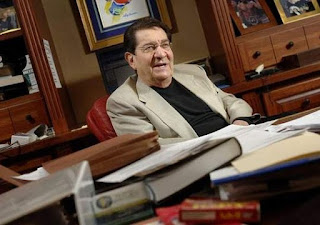 Yesterday, in my frustration, I called to set up a time for a call with Mr. Fred Levin. For those who know, he is the major influence in Pensacola. His political clout can make or break an election. To my surprise and completely off guard, Mr. Levin was able to speak with me right then and there. It was brief but qualitative.
I expressed my concern for the overall perception of Pensacola because of asshats like Morgan and what all he’s doing that is going to be imminently uncovered. I mentioned his financial misappropriation and the sexual discrimination within the Sheriff’s office that is so prevalent that it borders on class action status, according to Marie Mattox. Mr. Levin told me that he had supported Morgan in the past and he realized the image being cast in the public forum that disgraces us all. Morgan being a liability for Pensacola was clear. Mr. Levin seemed unaware of the lawsuits pending by so many employees, particularly women but he suggested that the strongest candidate for Sheriff is John Johnson who announced his official bid yesterday. Mr. Levin suggested I contact Mr. Johnson with all the information I had. He believed that would be the best course of action.
While this may not seem like much, this tells me there is a divide in Levin and Morgan. We all know what that means. Whether Levin supports Johnson or Baldwin or the man on the moon, it seems like he sees Morgan for the liability he is. I would go so far as to say Morgan is a political pariah. This is good news for Escambia County.
Labels: discrimination disgrace Escambia County Fred Levin John Johnson Marie Mattox Pensacola Sheriff David Morgan Sir David